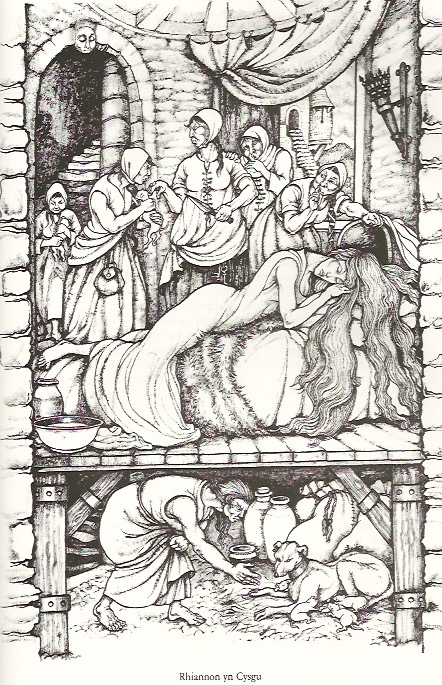 It is often said that faërie and folk tales contain remnant myths, the significance having been forgotten while the form remains. This is sometimes true, but I think not always. When such tales contain mythic material it is often quite apparent rather than obscure. But folk tales are as likely to contain elements of everyday wisdom, old social customs and, perhaps more significantly,  insights into our inner lives. It is in the latter case that the distinction between mythic and non-mythic becomes difficult to discern.

While some of the tales that have come down to us originate in collected oral lore, many more have undergone a process of literary production and changed through a series of written adaptations. Where these are simply people recording versions of traditional tales it might be that this is no different from the changes or nuances oral tellers might introduce for particular audiences or to suit changing times. Basic story elements and motifs were often linked together to allow open-ended adaptations and tales of varying length.  But the practice of weaving different stories together into a longer literary production was widespread during the Middle Ages and is not entirely absent from later literature. Here, even if the original tales remain intact, their context and the effects of shaping by more sophisticated literary devices integrate and overlap what had previously been kept distinct and linked only with connectives.

In the First Branch of the Mabinogi tales there is an episode where Rhiannon is falsely accused of murdering her own son who has in fact been snatched away in the night. The women who were supposed to be watching him smear Rhiannon with blood from a puppy while she sleeps  and leave the bones about her as evidence that she has devoured her own child. Like other episodes in these tales, this one has parallels elsewhere in folk and faërie narratives as well as in more obvious mythic material. Mabon, Son of Modron, is said to have been taken from his mother “when he was three nights old” in the tale of Culhwch and Olwen. Reading the implications across to the closely related Mabinogi tales, this contextualises the relationship between Rhiannon and her son with that between Modron and Mabon, whose names are later versions of Matrona and Maponos. The mythic context of a divine son of a divine mother is therefore unmistakable. But the broader setting in this tale of a wife who is falsely accused of murdering her child occurs more widely in folk narratives and in the content of faërie tales even when its mythic context is less obvious. Not only does the woman lose her child, but she is maligned and has to undergo humiliation or punishment before her child is eventually returned to her.

We can construe this in mythic terms too, but underlying the symbolism of the seasonal cycle this is one of the deeply embedded themes of folk narrative across many cultures which take on significance in different ways when told within particular cultures. Then they take on resonance and power, as if their significance is potential and dormant until they are enacted with other elements of universal folk narratives and the potential is realised. Like the gods they inhabit psychic space but manifest themselves in physical space in particular forms in particular places and take on identity in the stories we tell.

So as well as embodying mythic themes the universal motifs of folk narratives also contain elements of deep soul stuff, keys to personal journeys, initiatory experiences and perceptions of otherness. Sometimes they are simply agencies for other significant events in the story. So with Rhiannon’s ‘humiliation’ at the horse block and the eventual restoration of her son by Teyrnon all of which follows from this accusation, supporting the mythic content and opening the way to it.

Consider, too, how the same theme is used incidentally in this way in Grimm’s tale of the Six Swans ( and its variants such as the Seven Ravens). Here six brothers have been turned into swans and the only way their sister can restore them to human form is to sew a shirt for each of them out of Star Flowers (Stitchwort?).

But she must also remain silent for the six years it will take her to do this. While undertaking this work she is discovered alone in the forest by a young king who marries her in spite of her unwillingness to say a word to anybody. She, too, then has her children snatched away and is falsely accused of killing them but cannot defend herself so is condemned to death. The tale concludes as follows:

When the time had elapsed, and the sentence was to be carried out, it happened that the very day had come round when her dear brothers should be set free; the six shirts were also ready, all but the last, which yet wanted the left sleeve. As she was led to the scaffold, she placed the shirts upon her arm, and just as she had mounted it, and the fire was about to be kindled, she looked around, and saw six swans come flying through the air. Her heart leapt for joy as she perceived her deliverers approaching, and soon the Swans, flying towards her, alighted so near that she was enabled to throw over them the shirts, and as soon as she had done so, their feathers fell off and the brothers stood up alive and well; but the youngest was without his left arm, instead of which he had a swan’s wing. They embraced and kissed each other, and the Queen, going to the King, who was thunderstruck, began to say, “Now may I speak, my dear husband, and prove to you that I am innocent and falsely accused;” and then she told him how the wicked woman had stolen away and hidden her three children. When she had concluded, the King was overcome with joy, and the wicked stepmother was led to the scaffold and bound to the stake and burnt to ashes.

The episode has differences of detail but a clear similarity of form with the Rhiannon story. If the mythic significance of this is less obvious it does touch something deep in its references to transformation across species and the working out of a number of folk tale motifs, including that of the falsely accused wife which is simply the last of a series of adversities which are resolved in the final scene.

So, too, with Rhiannon when her son, now named Pryderi (‘care’, ‘anxiety’) is restored to her and she is restored to her proper place in the court. But here is a difference. In the mythic tale it is necessary that the restoration is complete:

Pryderi, son of Pwyll Pen Annwn, was raised with care as was proper, until he became the most gallant youth and the handsomest and the best skilled in all worthy pursuits of any in those lands.

But in the folktale the human dimension of incomplete resolution prevails. The little touch of one unfinished shirt resulting in one brother retaining a swan’s wing instead of an arm suggests that, for us, it never quite works out so neatly. As with the gods, so with us; but imperfectly so.