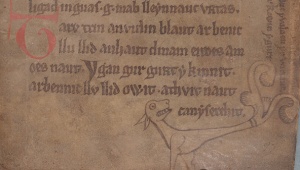 An interpretation of the conversation between
Gwyn ap Nudd and Gwyddno Garanhir.

This conversation appears in a manuscript collection known as The Black Book of Carmarthen which is a collection of copies from earlier manuscripts made by a monk in Carmarthen in the Thirteenth Century, some of which are verses which may have originally been embedded in lost prose sagas. As with much early Welsh verse some parts of it are difficult to interpret and the only easily available version in English is that contained in Skene’s Four Ancient Books of Wales, a pioneering translation which is now regarded as flawed. I’ll provide my own attempt to translate it during the course of the ensuing discussion based on consulting modern editions and commentaries in Welsh. There are some uncertainties expressed by careful modern scholars and I have taken note of these while also venturing to suggest interpretations which they do not explicitly give but which are implied by their commentaries.

The conversation takes the form of series of englynion, each three-line englyn conforming to the syllabic and metrical requirements for the type of englyn used with apparent exceptions usually ascribed to faulty manuscript copying. The requirements of the englyn form would have determined the precise choice of words and expression and it’s necessary to be sensitive to that process when deciding on possible meanings of uncertain phrases. The exchange follows a conventional format to begin with of a defeated warrior asking for protection from his attacker. But as, in this case, the conversation is between an historical character and a mythological character it soon develops into an enquiry  into the nature of Gwyn ap Nudd which implies his coming from the Otherworld as a harvester of the dead. It is likely that it was not necessary to be explicit about this for readers or hearers of the poem and the nature of these poems is anyway that they are usually elliptical rather than explicit.

A typical feature of one of these conversation poems is that there would be a balanced exchange between the two parties and this is how this poem begins. But it then develops into a monologue from Gwyn with the occasional interjection from Gwyddno.  A problem here is that the manuscript does not indicate who is speaking and although this is often obvious there are one or two places where it is not. The final section of the poem as published by Skene is often detached by modern scholars who profess themselves uncertain if it belongs to the exchange although there is no indication in the manuscript of a new poem beginning and as this is usually indicated by a larger coloured capital or ornamented letter. I’ll discuss below another reason why I think it should be regarded as a continuation of Gwyn’s monologue.

Fierce bull of battle, awesome
Leader of many , slow to anger,
Of trust unfailing, who will protect me?

From the man who leads the conquest
Invincible lord,  strong in anger,
You who ask shall have protection.

Having established his safety Gwyddno begins to ask his questions:

Since you give me such protection
I will ask you, Lord of Hosts
Where is the land from which you come?

The answer is characteristically oblique, not so much identifying a place of origin as a function:

I come from many battles, many deaths
With shields held aloft,
Many heads pierced by spears.

Unperturbed by the indirectness of the answer, Gwyddno tries again:

I greet you great warrior
Your shield ready,
Tell me, great one, of your descent.

At this point it begins to be clear that Gwyn is more than a victorious opponent who is being placated but a powerful figure with special attributes. Gwyn answers and Gwyddno replies politely also identifying himself:

My horse is Carngrwn from battle throng
So I am called Gwyn ap Nudd
The lover of Creiddylad, daughter of Lludd.

Since you, Gwyn, are so forthright
I will not hide from you
I am Gwyddno Garanhir.

At this point the contemporary audience may have been reminded of the story of Gwyn’s love for Creiddylad related as an aside in the story of Culhwch and Olwen. It is clear, anyway, by now that he is a mythological figure and from this point on he begins a monologue making his Otherworld nature more apparent rather than responding to questions from Gwyddno. The next four verses are therefore from Gwyn:

The white horse calls this talk to an end
His bridle leads us away
Hurrying to battles in Tawe and Nedd.

Not the Tawe here in this land
But the one far away in a distant land
Where the tide ebbs fiercely on the shore.

I have a carved ring, a white horse gold-adorned
And to my sorrow
I saw battle at Caer Fanddwy.

At Caer Fanddwy I saw a host
Shields shattered, spears broken,
Violence inflicted by the honoured and fair.

His horse is clearly a kindred spirit, calling him away to battles elsewhere. So we begin to get the sense of Gwyn as one who is called to wherever battles are raging, his function as Lord of the Dead, harvester of souls, becoming apparent. ‘Tawe’ and ‘Nedd’ are both rivers in South Wales. But he says it is not to the Tawe nearby he is called but to one far away. Where this might be is made clearer in the next two verses where he refers to Caer Fanddwy a place in the Otherworld mentioned by Taliesin in the poem Preiddeu Annwn, one of the forts in Annwn raided by Arthur (‘Save seven none returned from Caer Fanddwy’).   So not only is Gwyn clearly an Otherworld character but he performs the task of Lord of the Dead, attending battles in that world too. But while he was previously portrayed as being victorious in this role, in the Otherworld he is sorrowful.

Gwyn ap Nudd, helper of hosts,
Armies fall before the hooves of your horse
As swiftly as cut reeds to the ground.

This seems to enable a change of direction for Gwyn:

My hound is sleek and fair,
The best of hounds;
Dormach he is, who was with Maelgwn.

There is some uncertainty about the name Dormach. The scribe had originally written Dormarch but the second ‘r’ has been removed and a space left in the manuscript. It is, however interesting that he belonged to Maelgwn as he had a legendary pack of hounds referred to by later Welsh bards. Gwyddno, of course, was father of Elffin who discovered Taliesin in a weir. He was lord of the land drowned in the legend of Cantre’r Gwaelod. More of this in a later post but it is interesting to note here their connection in legendary history.

There is some confusion about who speaks the next verse, partly caused by an uncertainty about the meaning of part of the wording. It could be argued that Gwyn continues to speak but in my interpretation I suggest that Gwyddno speaks:

Dormach rednose – why stare you so?
Because I cannot comprehend
Your wanderings in the firmament.

The reading of the final line is difficult, but interpreting it in the way I have allows for a reference to the Wild Hunt, and an indirect reference to Gwyn’s role as its leader.

Following this verse there is a complete change of tone and direction so that some scholars have doubted if it is a continuation of the same poem although there is no indication in the manuscript that it isn’t. Some uncertainty has also been expressed as to who speaks the remaining verses if they are to be regarded as part of the same poem. But if we regard the reference in the verse above as being to the Wild Hunt, it does not seem to me problematic to regard them as being spoken by Gwyn and relating to his activities as a harvester of souls:

I was there when Gwenddolau was slain,
Ceidio’s son, a pillar of poetry,
When ravens croaked on gore.

I was there when Bran was slain,
Ywerydd’s son of wide fame,
When battle-ravens croaked.

I was there when Llachau was slain
Arthur’s son, wondrous in wordcraft,
When ravens croaked on gore.

I was* there when Meurig was slain,
Careian’s son, honoured in praise,
When ravens croaked on flesh.

I was there when Gwallog was slain,
From a line of princes,
Grief of the Saxons, son of Lleynog

I was there when the warriors of Britain were slain
From the east to the north;
I live on; they are in the grave.

I was there when the warriors of Britain were slain
From the east to the south;
I live on; they are dead.

*Here the manuscript reads ‘I was not there’ (‘Ny buum’ instead of ‘Mi awum’) but it is likely that this is a scribe’s mistake.

And so finally we may note the characterisation of Gwyn in folklore as the leader of the Cwn Annwn and so the Wild Hunt and another of the references to him in Culhwch and Olwen where the giant Ysbadadden tells Culhwch that he can never hunt the Boar Twrch Trwyth without Gwyn ap Nudd who “contains the nature of the devils of Annwn”. This is the burden he takes upon himself. In the medieval Life of St Collen, this Welsh saint is said to be lured by Gwyn – described as King of Annwn – into his fortress, but the saint throws holy water over him. In a medieval Latin text advising the clergy how to deal with superstitions an addition was copied in by a Welsh monk referring to Gwyn ap Nudd and his “concubine” in the context of love trysts in the woods, a not uncommon theme of medieval Welsh poetry. There are various passing references to him by the medieval Welsh bards, usually in the context of being lost in the mist and encountering Gwyn or the Cwn Annwn. In the view of Idris Foster[*] his original character was lost in some of these later references to him which simply see him as a leader of the Tylwyth Teg. He describes a number of “fluctuating descriptions” ranging from fairy to devil, but concludes that underlying these “there was one basic conception which was decidedly old – that of Gwyn as the magic huntsman”[*].